You can prevent and control coronary heart disease (CHD) by taking action to control your risk factors with heart-healthy lifestyle changes and medicines. Examples of risk factors you can control include high blood cholesterol, high blood pressure, and overweight and obesity. Only a few risk factors—such as age, gender, and family history—can’t be controlled.

Your risk for CHD increases with the number of risk factors you have. To reduce your risk of CHD and heart attack, try to control each risk factor you have by adopting the following heart-healthy lifestyles:

Know your family history of health problems related to CHD. If you or someone in your family has CHD, be sure to tell your doctor. If lifestyle changes aren’t enough, you also may need medicines to control your CHD risk factors. Here’s what you can do to reduce the risk of a major disability or even death:

Cardiovascular disease is a serious and unremitting problem in the United States and the world. Screening individuals with risk factors (such as elevated age, high blood pressure, high cholesterol, a family history, diabetes, and smoking) may be useful to identify people with undiagnosed disease who could then benefit from lifestyle changes, medications, and a variety of treatment options.

More research needs to be done to define those most likely to benefit, but earlier identification of disease may improve health outcomes. Importantly, screening provides an educational opportunity that can happen in many settings: the hospital, family physician’s office, health fairs, and community settings. The focus should be on accessibility and evidence-based application of findings, so those at risk can benefit. 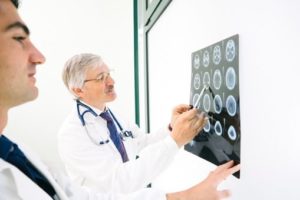 A stroke, or “brain attack,” occurs when blood circulation to the brain fails. Brain cells can die from decreased blood flow and the resulting lack of oxygen. There are two broad categories of stroke: those caused by a blockage of blood flow and those caused by bleeding into the brain. A blockage of a blood vessel in the brain or neck, called an ischemic stroke, is the most frequent cause of stroke and is responsible for about 80 percent of strokes. These blockages stem from three conditions: the formation of a clot within a blood vessel of the brain or neck, called thrombosis; the movement of a clot from another part of the body such as the heart to the brain, called embolism; or a severe narrowing of an artery in or leading to the brain, called stenosis. Bleeding into the brain or the spaces surrounding the brain causes the second type of stroke, called hemorrhagic stroke.

Two key steps you can take will lower your risk of death or disability from stroke: control stroke’s risk factors and know stroke’s warning signs. Scientific research conducted by the NINDS has identified warning signs and a large number of risk factors.

Some factors for stroke can’t be modified by medical treatment or lifestyle changes.

Family history of stroke. Stroke seems to run in some families. Several factors may contribute to familial stroke. Members of a family might have a genetic tendency for stroke risk factors, such as an inherited predisposition for high blood pressure (hypertension) or diabetes. The influence of a common lifestyle among family members also could contribute to familial stroke. Cholesterol is a waxy, fat-like substance that occurs naturally in all parts of the body. Your body needs some cholesterol to work properly. But if you have too much in your blood, it can combine with other substances in the blood and stick to the walls of your arteries. This is called plaque. Plaque can narrow your arteries or even block them.

High levels of cholesterol in the blood can increase your risk of heart disease. Your cholesterol levels tend to rise as you get older. There are usually no signs or symptoms that you have high blood cholesterol, but it can be detected with a blood test. You are likely to have high cholesterol if members of your family have it, if you are overweight or if you eat a lot of fatty foods.

Your blood pressure reading uses these two numbers. Usually the systolic number comes before or above the diastolic number. A reading of

High blood pressure usually has no symptoms, but it can cause serious problems such as stroke, heart failure, heart attack and kidney failure.

You can control high blood pressure through healthy lifestyle habits such as exercise and the DASH diet and taking medicines, if needed. 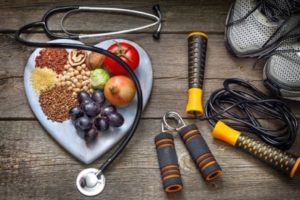 Many factors affect your health. Some you cannot control, such as your genetic makeup or your age. But you can make changes to your lifestyle. By taking these steps toward healthy living, you can help reduce your risk of heart disease, cancer, stroke and other serious diseases:

A plant based diet has been shown to help prevent and reverse the effects of chronic diseases like type 2 diabetes, heart disease, autoimmune conditions, and obesity.

Here’s a beginner’s guide to getting started. First, don’t think of this as a deprivation diet. The food is delicious, and you can enjoy plant-based versions of the foods you already love. Focus on the positives!

Once you get started, it’ll be easier to keep going. As Dr. Craig McDougall says, “Once you have more energy, have lost some weight, or your stomach pain has disappeared, then it’s easier to continue eating healthfully. One of the best motivators for people transitioning to plant-based eating comes from how great they feel and how much more than can do in their lives once they’re feeling healthier.”

What to Eat on a Whole-Food, Plant-Based Diet

A whole-food, plant-based diet is centered on whole, unrefined, or minimally refined plants. It’s a diet based on fruits, vegetables, tubers, whole grains, and legumes; and it excludes or minimizes meat (including chicken and fish), dairy products, and eggs, as well as highly refined foods like bleached flour, refined sugar, and oil. We have compiled a list of informative websites to help you find out more about common heart health issues.

It is important that you refer to reputable sites like these when you are browsing the Internet for information pertaining to your health to avoid websites with misleading or inaccurate content.

http://jimmyconwaymd.com/plant-based-okc/
Plant Based OKC is a group that provides guidance on a plant-based diet to help prevent and reverse heart disease.

CardioSource
http://www.cardiosource.org/
The American College of Cardiology is a leader in the formulation of health policy, standards and guidelines, and is a staunch supporter of cardiovascular research.

MedlinePlus
http://www.nlm.nih.gov/medlineplus/
Health information from the National Library of Medicine.

Professional staff working in a beautiful facility with great doctors who sincerely care about their patients. Without Dr. Schmidt's skill, I would have needed heart bypass surgery instead of a stent. Follow-up has been thorough. I can't recommend them highly enough.
-
LeAnn Harner

Dr. Jim Melton and all the staff are fantastic. He is an excellent surgeon and his team is GREAT!!!! I just had surgery at the surgery center, I have only great things to say about my experience. Without him I really don't think I would be here to write this. If you’re looking for a good cardiovascular team, they are a 5 star for sure.

Dr. Parsons and staff are amazing. He truly listened to me from the consult. Staff showed genuine care for my progress post procedure. I had my follow up appointment today so satisfied with results. Blake made me comfortable from the start. He is an activist for uterine fibroids treatment beyond the standard.

Professional and caring staff. Dr. Smith is very knowledgeable and shows genuine concern for your personal health. I enjoyed the background music in the procedure room, it really adds to the relaxing atmosphere.

Dr. John Schrader is the most personable doctor we know. He stays on top of my dads health care and is genuinely concerned about his health. We never leave his office with questions. He answers them all. Even questions we don’t think of. Always professional but never cold or bad bedside manner. In our opinion he is THE BEST around.
Thank you Dr Schrader.

I came to Dr. Warren by a self referral for mals when it took me 8yrs 50+ doctors and thousands of dollars spent on no answers. My first visit I was scared I was just going to be gaslighted just like the past however I was pleasantly shocked when Dr. Warren immediately believed me. She took the time to review many disk I had brought from past tests. She never once dismissed me and listened to ever word I had to say. She scheduled one last test to confirm the diagnosis then I was scheduled for surgery right away. Surgery was a success and I can’t thank her and her staff enough. Dr. Warren truly saved my life.

Dr. Garner literally saved my life 18 months ago and I've followed him to his new practice with Cardiovascular Health. He explains things so clearly, listens and is just a very nice person. His staff is great, too! I highly recommend!

Some of the nicest staff that I have ever dealt with!! They have been so incredibly awesome to my mom!! Would definitely recommend them to anyone!! Thank you so much for being so great with her!!